Several months ago I received a surprise package from Sue Ann Spiker. She wrote, “Bobbi, I found this priceless book while I was going through Adeline’s things. It is a beautiful old reader. Take care and God bless.” 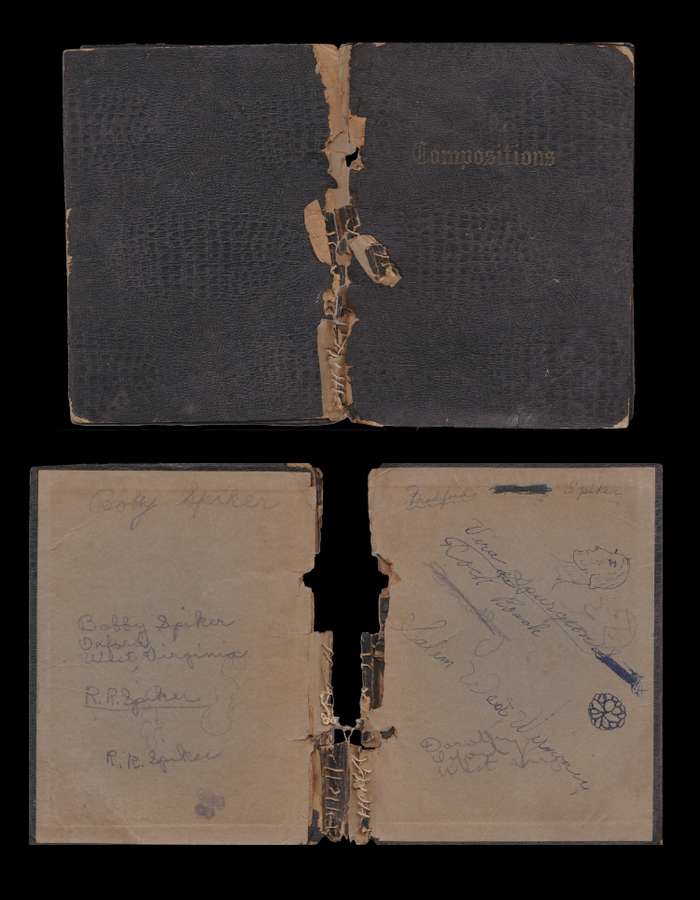 The fragile book is little more than a front and a back cover literally held together by a thread. My father’s boyhood name, Bobby Spiker, is scrawled inside the front cover. Replacing the original composition pages are hundreds of Beginner and Primary weekly lesson stories for Sunday School - the ideal early-readers for the children attending the South Fork Baptist Church.

You may not realize that Sunday schools were originally just that - SCHOOLS. Here is a little history lesson for you. At a time when secular education was in its infancy, and daily Public schools were scarcely known, Sunday schools were often the only places where children could learn to read and write. Robert Raikes, publisher of the Gloucester Journal, England is credited with helping turn Sunday education into an International Movement. 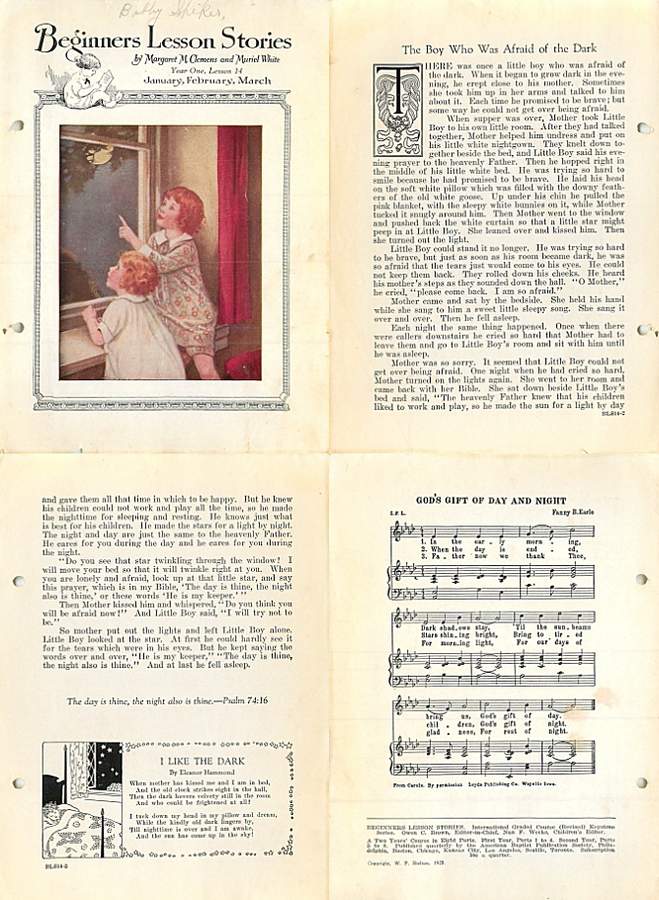 By the end of the 18th century, Britain was in the grip of the Industrial Revolution. It had created a new class of wealthy entrepreneurs and a comfortable middle-class. But for the working-class, it introduced harsh, seemingly impossible ways to make ends meet. In most situations, every able family member was needed to work to keep the family above poverty level. This meant that the children - some as young as five years old - worked in dangerous factories and mines 12-14 hours a day, for six days of the week!

Robert Raikes was appalled by the brutal conditions these youngsters had to endure at work, at home, and on the streets. Ignorance was prevalent, and little effort was being made to educate them “to be good and useful citizens.” There was no “free schooling” for the poor, and he realized that when children did not learn to read and write, they were unlikely to rise out of the cycle of poverty. So he devised a plan to gather poor, illiterate, working-class children into education class on Sundays - the children’s only day off.

Raikes started his first Sunday school in 1780. He created manuals of elementary lessons to teach spelling, reading, and writing. A devout member of the Church of England, he also printed lesson sheets with the Ten Commandments and Scripture verses to teach moral principles - a so-called “double-duty curriculum.” The idea quickly spread, and soon Christians throughout England and the United States were organizing Sunday schools in their own communities, using the Bible as their primary text.

Over time, the Common school system began to improve. It assumed more responsibility for the general education of the youth, thereby freeing the Sunday school system to focus on moral and spiritual education. With renewed purpose, Sunday school Unions were formed to promote the movement throughout the U.S. The goal was to “Christianize America so America can Christianize the world.”

Considered by many to be “the greatest day in all the history of the Sunday school movement,” April 18, 1872, was the birth day of the International Uniform Lessons - a Bible study covering the same topic, using the same lesson, being taught in every school the world over. The program consisted of a cycle of lessons, each cycle lasting six years, with three and a half years devoted to the New Testament and two and a half to the Old Testament. At the meeting of the International Sunday School Association in Denver, in June, 1902, a “graded system” was added to carry a pupil from the kindergarten age of four to twenty-one years, based on his age, development, and spiritual needs.

On January 2, 1910, the Omaha Daily Bee (Omaha, Nebraska, Page 9) printed, “The development of the world Sunday school is a remarkable story of religious activity. First an organization of a few schools, then state-wide, then national, then international, then world-wide, until now thirty-seven countries and fifty-three denominations are united by the great tie of common Bible study…Today 30,000 Sunday school scholars begin a new year of Bible study. They will all study the same lessons, no matter what language they speak or to what denomination they belong. The story of how the whole Protestant world has become united through its efforts to teach the Bible to children of [t]he nations constitutes one of the most interesting chapters of religious history, and reminds one of the saying that ‘a little child shall lead them.’ Here the lion of religious controversy does indeed lie down with the lamb of unity and sectarian strife is forgotten in interdenominational co-operation.”

To ensure access for everyone, the weekly lessons were also included in hundreds of newspaper publications. In its introduction of the series, The Fairmont West Virginian wrote, “To those of our readers who are forced to miss the regular weekly class room exercises we are pleased to offer this feature as an excellent substitute.” The March, 1912, article (below, left) also dutifully admonished, “No longer can the busy or careless offer as an excuse for staying home Sunday morning the oft-repeated, ‘I don’t know the lesson.’”

The 288 Uniform Lessons were designed to cover the Bible in six years. The cycle was then repeated. The Sunday School lesson titled The Report of the Spies, for example, appeared in the Cassville Republican in 1926 (above, right) then again in 1932. The article listed of all the corresponding “graded” titles too. Shown here is little Bobby Spiker’s copy of the Primary Topic titled Two Brave Spies. As one of many stories discovered in the old reader, we are reminded that the tiny South Fork Baptist Church participated in the monumental movement, colloquially dubbed “The World as One Massive Sunday School.”