Editor’s Note:  After the 2015 Reunion, Mike Spiker suggested we contact Angie about the “Billfold Gift” story.  According to Mike, it started when…

“Dr. Mark Spiker put a billfold on the Give-Away table. His grandson, Blake, selected the billfold after his name was called. Fortunately, Mark did not put the other billfold on the table…but I will let Angie tell the story.

PS - THE MORAL OF THE STORY - according to me - is that you never know what you might win at the reunion drawing or what MIGHT BE IN IT.”

So we asked Angie, and here’s what she wrote in her reply: 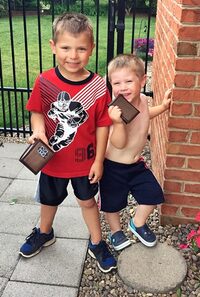 Both boys had been playing with their wallets all weekend. After we got home, Bryce was playing with his and he pulled out a big pile and said, “Yea, Pap Paw gave me two more dollars and some papers!!! Here, Blake, you can have one dollar and one paper.” 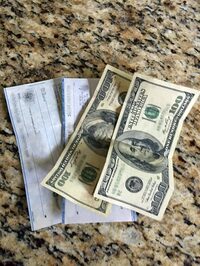 I looked over at what they were doing and said, “Let me see that” and “Where was it?” (referring to the ‘big pile’.) Bryce showed me that it was in a hidden compartment inside the wallet. There were two $100 bills and two blank checks!

I called Dad, laughing, because I knew it was a mistake, and of course we are giving it all back to Dad. Ha ha ha…Dad had put that in there a long time ago and forgot.

Dad is excited to have the $200 that he forgot he had. I told Dad, “At next year’s Spiker Reunion, I am grabbing the wallet first from the giveaway table. Ha ha ha.”