*(Transcribed from a letter written by Yetive Struzik, Pearly and Cora Spiker’s only daughter, to Bob and Dean Spiker in response to Dean’s request for genealogy information. A copy of the original letter can be viewed here.)

(Read the book that inspired the name, Graustark.)* 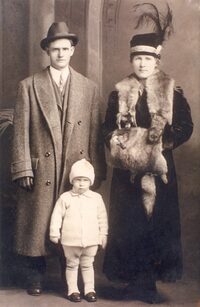 I was certainly surprised to hear from you and I would have answered your letter sooner but my daughter, Joan had your letter. She, also, is interested in Genealogy and she is getting copies made of all her records. She will write you more about this. She has lots of questions too but I will leave all that to her. My memory isn’t too good but I don’t think I ever met Bob, if I did he was only a little boy. I will be 76 yrs. old this year so that makes a big difference in age.

You sure can find out a lot of things when you dig back. I never heard of a Great-Uncle named Atlantic Ocean Spiker. I bet he had a hard time with that name. My name, Yetive, was taken from a popular book “Graustark”. It was a love story and my parents thought that would be a lovely name for me but it has sure given me a lot of trouble in my life. Most people can’t pronounce it or spell it. So every time I go anywhere and someone has to pronounce my name, when I see them stumbling over it, I always help them and then I hear, “That is sure a different name. What nationality is it?” As a teen-ager I would get upset about it but now I am used to it and it is a joke. My father got very upset one time when I said I had so much trouble with that name. He said why didn’t you change it? So I was careful when I named my children that they would have names you could pronounce. Of course, they probably wanted some other name. Ha! I remember that Aunt Gracie would never tell anyone her middle name and my husband would pester her to try and find out what it was. One day, he found out it was Girdle and ever after that he would kid her and call her Aunt Girdle and she would hit him and he would get a big laugh out of that. My husband didn’t like his name, Alonzo, either but in high school when he was kidding around and talking like an Italian they started to call him “Tony” so when I met him, most people called him Tony so I did also. I always said I only married him because he was the only person who did not mispronounce my name or ask questions about it after I told him what my name was. Ha!

I have met Lynn’s wife when Lynn & family came to see A. Gracie. I get a Christmas card from them each year with a little note. I remember Lynn very well as he was a lot of fun and we always had a good time when we went to W.Va. Can’t remember the last time I was there. I guess I will close now. Joan will write more. It was good to hear from you. Give my love to all.