Just as I might do when “crashing” the Spiker Family Reunion on Memorial Day weekend, I’m dropping by to reminisce about how important education has been for many years to the residents living in the “loop” beginning at White Oak going toward Holbrook, then toward Oxford and back to White Oak. Many of the families early on saw that their children went to college.

It was a surprise to me, however, that my great-great-grandparents, H. B. and Elizabeth Tharp (whose children and grandchildren all died young) had a son George who attended West Virginia University.

When I was working once on a public television documentary about WVU, my parents (Max and Lucille Cox DeBerry) thought I should have a letter George had written to his parents – to hang on my office wall.

My father thought this was a typical letter from a college student: George seemed glad to share his grades; gave a lot of information about how “good” he had been and, of course, he needed money!  We all thought, though, that young Mr. Tharp was inclined to be a bit extravagant!

George must have also passed the Spiker home site in his travels as he was growing up in the curve of the road between Summers and Holbrook.  Note: the address on his letter is definitely “Holbrook.”

The letter bears the same information as on the envelope along with the State Seal and a scroll extolling West Virginia University. Also preprinted, except for only a line of insertion of the month and day was Morgantown, March 21 1881. George must have acquired this stationery during the previous term since it was postmarked 1882.

NOTE: In Bradford Spiker’s THE GOOD-WILL COMMUNITY A HISTORY OF HOLBROOK, W.Va. 1814-1945 under THE WALNUT GROVE METHODIST EPISCOPAL CHURCH, he writes: “A few of the ministers who preached in the school were, T.B. Hughes.” 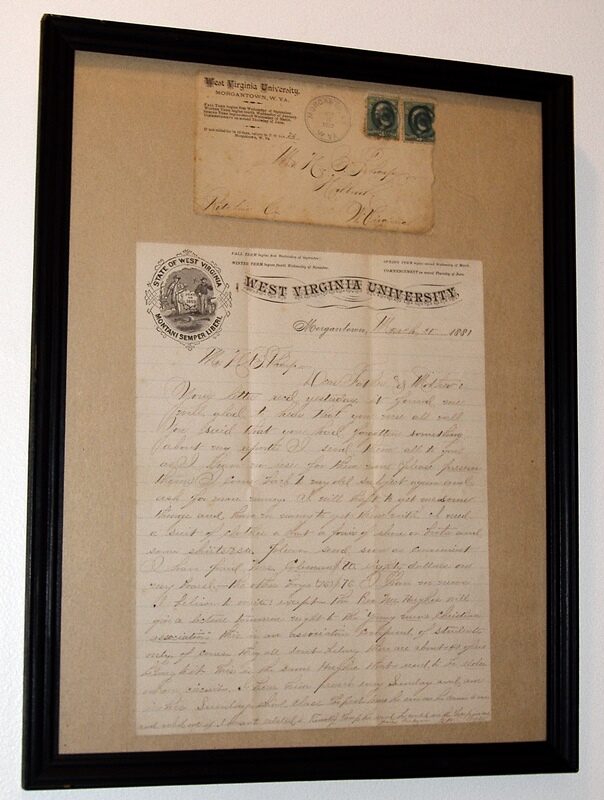