Christmas is a time to get together to celebrate the birth of Jesus and to share the love and warmth of family. A sight, a sound, even a smell can trigger memories of past Christmases where the blur of time lets us recall only the best and most loved snapshots of that period in our lives.

While decorating the tree with my grandchildren, I remembered all the years my father and I would search for the perfect Christmas tree. We would walk through the fields of evergreens sometimes coming back two or three times to be sure we had the right one. I recall Daddy saying things like “No, we can’t cut the top out of that one.” and “Is it taller than my head? Then no, we can’t take that one.” But most vividly, I remember the year Daddy was too sick to take me and asked my brother, Jeff to take over his part. I was most apprehensive about this. I knew my desire for perfection might irritate a young, single man MADE to take his younger, teenaged sister shopping.

Daddy must have told him what tree farm to go to because we headed straight there with no hesitation. He stopped and asked the owner for a saw as we’d forgotten to get ours, and then drove up the hollow and parked. Just minutes after getting out of the truck, I saw a BEAUTIFUL tree…. the perfect height, the perfect width (they had to be full and fat)….but what if I saw one BETTER? Jeff followed me all over that tree farm, never complaining, giving me opinions and encouragement for an hour or more before I brought him BACK to that first tree. He asked if I was sure, never hurrying my decision and then proceeded to cut it down and bring it home. Although he teasingly complained to Dad about it being the first tree we saw, THAT was the best Christmas tree I can remember getting.

Then I began to wonder what Christmas was like at the Spiker Farm when Daddy was young and I thought others would also be interested. Putting this idea into action, I called Aunt Ann and Aunt Boots and asked if they could give me some insight into who picked out the tree? Where did they get it? Where was it placed in the house? What kinds of decorations were used? Were they homemade or store bought? Their answers to these questions were enlightening and gave me a perception of life on the farm that I had never been privy to before.

Aunt Ann remembers trudging through the snow (seems there was always snow for Christmas in those days) with her dad, Jake, to pick a tree from off the farm to bring back. Aunt Boots remembered my dad, Bob, taking over from Jake in later years. The tree always stood in the downstairs entrance hall in the corner below the stairs. Both girls remembered how terribly cold it was in that room as they never used it. The parlor was kept for company and the family always gathered in the dining room, shutting off the heat from those front rooms.

Ann and Boots were in charge of bringing the special Christmas bulbs down from the attic and then returning them after Christmas was over. Both girls spoke of how old and beautiful they were, neither knowing the origin of them or where they may be today. Could they once have belonged to Gay’s mother? Does someone in the family put these same ornaments on their tree today? Do they know how well loved these ornaments were?

Popcorn strings and ornaments made in church or school rounded out the decorations and all were covered in a layer of icicles that Aunt Ann remembers having to roll carefully back around the cardboard each year when taking the tree down. No lights (as they didn’t have electric) or candles were used and Aunt Ann made mention that it was very plain by today’s standards.

They would bake Christmas cookies and make pumpkin pie with real whipped cream made from milk gotten from the cows on the farm. “MMmmmmm…..so good.” says Aunt Boots. They couldn’t either one remember if there was a certain menu that was followed every year but they “always had real good food!”

One particular memory stands out in the mind of Aunt Boots, one she recalls fondly as being “the perfect Christmas setting….just like a card. Dad (Jake) hooked the horses up to the sled and took the whole family through the snow down to the Holbrook Methodist Church to see the Christmas play about the birth of Jesus. Mother (Gay) made the costumes.”

On Christmas morning they would gather at the tree to open what little presents they received. There were never very many and a few years they might only have gotten an orange and some candy (as my own Dad, Bob, would tell us kids). Oranges seemed to be a special treat that they only got for Christmas or when one of the girls in the family had a beau over. They couldn’t remember exactly what the gifts were wrapped in but supposed it was a tissue paper wrapping.

Both girls had a special gift they remembered getting. For Aunt Ann this was a “beautiful doll from Dorothy and Hayward.” (Remember, when Bob, Ann and Boots were young, the elder children were mostly gone from the home.) Ann was only about 7 or 8 years old but she took good care of this toddler doll and when she moved out, she took the doll with her. She had a new dress made and sat her in a rocking chair and kept her on the floor of her bedroom until just this year when she passed it on to her granddaughter, Callie, who is now 9 years old herself. Personally, I hope she loves this doll as much as her grandmother did.

For Aunt Boots, it wasn’t so much the gift itself but the effort that went into the giving of it. One year, before Lynn was ever married, he couldn’t get home because of high waters and walked over the hill from his sister, Dorothy’s, house in Berea (about an hour’s walk) carrying Christmas presents. Inside were little umbrellas and rain coats for the girls that they proudly wore everyday to school.

After the opening of gifts, they would start the dinner as the elder children would be stopping by for Christmas dinner. This was when the girls were quite young. Later, the elders started having their own kids and the big family gatherings at the farm stopped. Their lives had also been interrupted by The War, and Christmas without the boys was particularly heart-rending. But Aunt Boots recalls them all getting together in her childhood and probably playing games likes Chinese Checkers or Dominoes. They might have “pulled Taffy” or made popcorn balls.

Though time brings many changes to our lives, through the years some memories endure and grow more precious to us. I hope that this Christmas is one that is so happy and filled with love that you’ll find yourself recalling it in the distant future and sharing it with your loved ones. Merry Christmas!

Photo of the Spiker children (estimated to be taken about 1922) submitted by Paula Nolan. 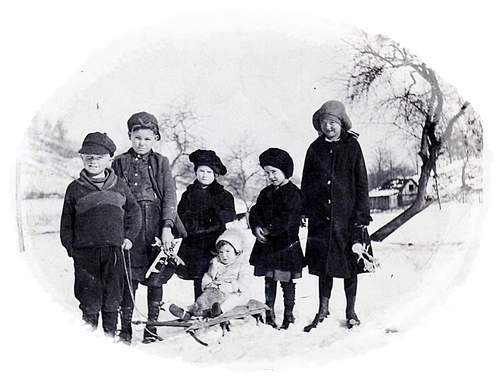 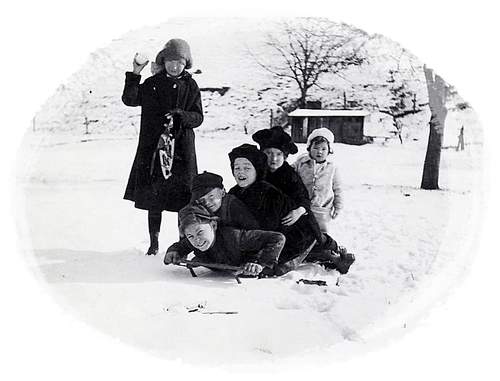