Sunday schools in the Holbrook/Oxford area followed the same patterns of education that we described last month. The curriculum “consisted of a spelling book and a Bible,” stated Bradford Spiker in his manuscript, The Good-Will Community. “It was thought in order to be able to read [the Bible] one must know his A.B.C.’s. If any one came to Sunday School who did not know his letters, he was placed under a separate teacher who taught him his letters. Later the Sunday School Readers came into service, and from these, our Sunday Schools of today have grown.”

The first Common school in the area was erected on the Middle Fork of the Hughes river. Organized in 1845, community subscribers Joseph Gray, Archibald Lowther, Elijah Summers and Sudney Willard entered into an agreement with Jonah Williams to “teach reading, writing, and arithmetic…for the term of three months or 65 days…to commence the 1st or tenth of November.”

Brad included a list of several local schools in his manuscript. Of greatest interest to us is the one that educated the Spiker family - the Sunny Point School. Established in 1885, it was initially called “Bear Run School” and later, “Lower Bear Run School,” in reference to the road and the creek by which the original school was built. Brad wrote, “The first teacher was Alice Neal. A few of the other teachers in this old building were Lora Pritchard, Bird Grimm, Caroline Huff, Lon Ireland, Emery Ireland, D.J. Richards, William McGill and Andy Wade.”

The school was renamed “Sunny Point School” when it was moved from Bear Run road to Holbrook road. Brad’s son, Mike, described the new location as “from the left of Holbrook road, going west, in the first sharp turn located less than 1/4 mile from the Spiker farm house. If you were sitting on the front porch and you were looking out, you could have seen it in front of you if there were no trees. Its name was due to the clear meadows in front of it, and to the right, as you would look down on Middle Fork creek, the sun stayed on the site longer than most locations.”

Brad wrote, “Charlie Batson, the first teacher in the present building, gave it the present name owing to its peculiar location.”

All of Jacob and Gay (Zinn) Spiker’s seven children were schooled there. “Lynn often talked about his time spent at Sunny Point school,” wife Adeline told us. “He said he would look out the window and long for the day to end so he could get out to ‘tend’ his animals. He said he often helped Dorothy with the dishes so she would go out with him. Because [our son]John heard his dad speak of ‘Sunny Point,’ that was his choice of names for the Bread and Breakfast he and Sue own.”

Adeline was referring to the 1800’s farmhouse in Jane Lew, WV, that John and Sue Ann Spiker renovated in 2003. They named it Sunny Pointe Guest House. This picture (left) hangs at the guest house. Sue Ann said, “This is Bob Spiker sitting on a bookshelf in the middle of the road in front of the Sunny Point School. That’s what happens when your brother is your teacher.”

Of course, Sue Ann was referring to Bradford Zinn Spiker — the eldest of Jacob & Gay’s children, a graduate of the Sunny Point school, and later a teacher at the same school — when his baby brother, Robert Roe Spiker, was a student there. (Oh, my.) 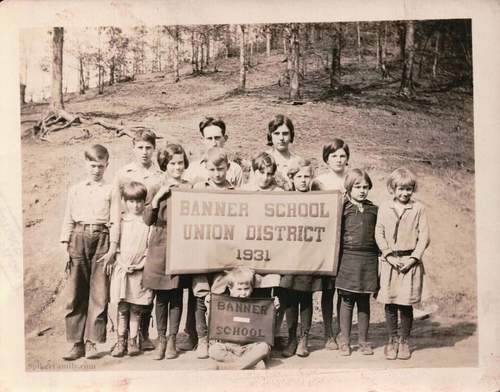 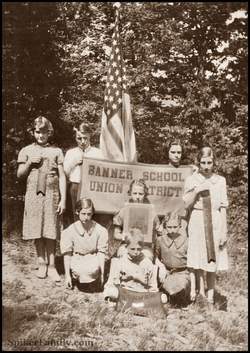 Sunny Point school was the Banner school in 1931. 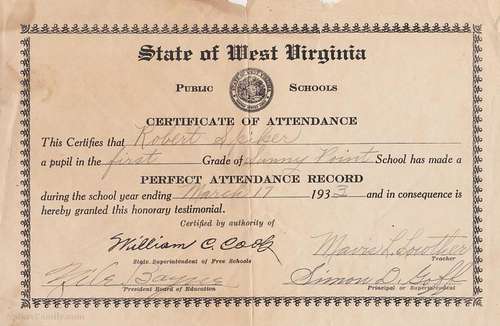 The following year, 1933, may not have been a “Banner Year,” but we know Robert Spiker showed up every day. 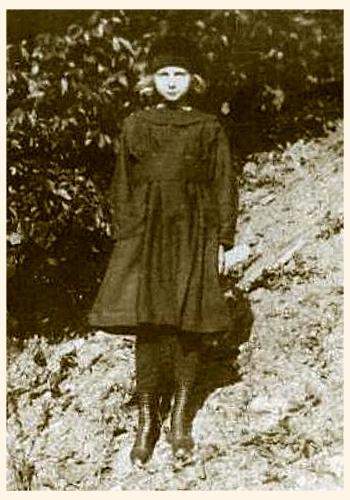 His Perfect Attendance Record was signed by teacher, Mavis Lillian Lowther (picture of her as a young girl, courtesy of Jerry Watson) School Principal or Superintendent, Simon Draper Goff, and President of the Board of Education, Nile Bayne.

The Sunny Point school closed in the Spring of 1945. Neighbor Harvey Shepler tore down the abandoned building in the 1950’s, salvaging the lumber for his many woodworking projects.

The school’s outhouse had been built through the efforts of FDA’s Works Progress Administration program. To preserve that part of the county’s history, Brad Spiker rescued the outhouse by relocating it to his home place temporarily. 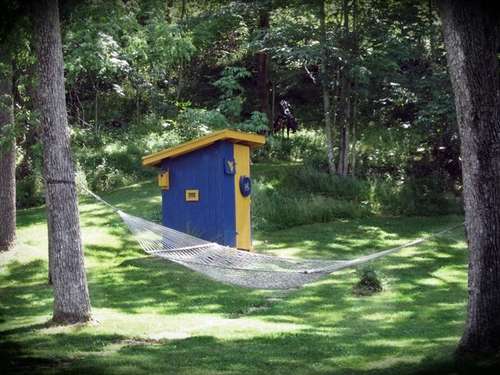 Brad and his sons, Mike and Mark, then “dug a hole” at the Spiker farm, and moved the outhouse to its present location.

More recently, Mike had it painted an awesome blue and gold. The functioning outhouse is now a landmark in the community

On a side note: It is entirely possible — though not proven — that Harvey Shepler used lumber from the school in his own 1800’s farmhouse. After all, he did a big renovation to his house in the 50’s, about the same time he dismantled the school. I’m just sayin’.

And…his daughter, Lois Shepler Gander, must have inherited his carpentry skills. You really need to see what she’s done with the place now. Click here for a tour.