I loved listening to my father’s stories about his childhood. Some tales were amusing. Some were unbelievable. But all of them were entertaining to me. Things were so different “way back then”. Likewise, my daughter enjoyed hearing my own stories about the way things were “way back when” I was a little girl.

Now we want to hear about YOUR personal history. Here’s a fun and easy way we can explore how our opinions, our lifestyles and even our world have changed through the generations.

For example, what was your source of transportation to school? My daughter rode an air conditioned bus for ten miles. My own bus ride to school took over an hour. One-way. There weren’t always enough seats available, so some of us had to stand in the aisle. And we couldn’t even imagine the luxury of air conditioning. My father never had a seat at all. He WALKED to school. Several miles. In three feet of snow. Uphill – both ways! You get the idea.

Just for Fun, let’s take a sneak peek into the lives of our extended family. Visit our FORUM and click on the topic titled “History Questionnaire”.

Melanie said, “(We) captured pictures and tombstone transcriptions of 126 headstones, some with ‘double occupancy’ on them, belonging to Spikers and Zinns and their extended families. These will be copied into my cemetery software over the next few months and added to the (family tree) website soon after that.

“We spoke to all them and asked if they knew us.

At the family cemetery for Vada and Manley Zinn, we met the wife of Manley Zinn (grandson of Manley and Vada).

“Here is a picture of the tombstone rubbing Cathy and I did of John Zinn. We first did the old tombstone as it won’t last.

“We also did the back of the new stone that Uncle Brad and others had erected in front of the old stone.

“The tree depicted in the picture has an ‘F’ at the bottom for Family. Then a ‘B’ on one side of the tree for the boys, and a ‘G’ on the other side for the girls. Notice one branch on the boys side divides into two for the twins. The transcription reads ‘MEMORAL of JOHN ZINN CENIOR. BORND IN THE YEAR 1778. DIED IN THE YEAR 1848 age 70 y. (Words misspelled are exact to stone)John and Ruth (Gandy) Zinn.’” 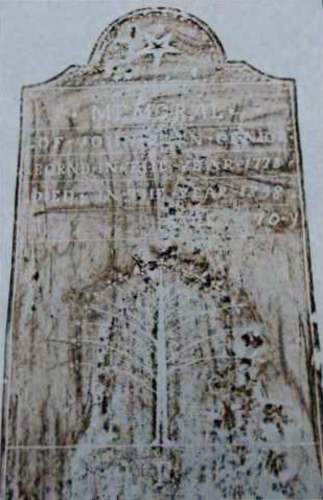