Less is known about Jake and Gay’s third child, Marjory Fay, than any of the Spiker children. She never married, never had children, and never moved out of the family home. She died at the young age of 52 from “unknown-natural causes.”

Paula, as the eldest niece, probably knew her best. She said, *When I visited the farm, it was only our family and the grandparents there. Uncle Brad and Uncle Bob lived nearby, but the rest of that generation had already moved out and gone their own ways. She played such a significant part in those early years and we had such wonderful experiences during my visits.

Aunt Marjory was a very hard worker, but Grandma let her spend fun time with me. She had collections of so many common items, like buttons, and I never tired of looking at them. We spent hours together and even slept in the same bed (until her snoring bothered me.)

I remember her red hair and the braids that were pulled up on the crown of her head. And I recall that she was short and quite heavy. Her weight seemed to make it somewhat difficult for her to get around, but she helped with chores and stayed busy. I played with her as I would a child. I feel that whatever happened to her (I have never heard what that was,) had occurred at an early age and impacted her brain development.*

Mark, just ten years old when Marjory passed away in 1963, recalls *Aunt Marjory could read and speak well, but she was limited mentally. I do not know her medical diagnosis. She played card games with me as a child (Rook and Rummy) and she liked to play Hide-and-Seek and work puzzles. But she was considered an adult, and she took care of her own basic needs. She had chores around the house like washing dishes, and she could sew.

She and Grandma Gay stayed with us [Brad’s family] a few summers at the farm. I remember that she had long hair, worn up in a bun. I was a young boy when she passed. I did not expect it and wished I could have said good-bye.*

I, the youngest niece, never met Aunt Marjory. She died before I was born. My parents talked about her, of course, but only two things my Mother said stick out in my memories – the story about the 1950 flood and a brief mention that Marjory had had Polio as a child. So I was quite surprised (as were all of my cousins) to learn from the Death Certificate that the “condition contributing to death” was Cerebal palsy. This revelation explains much about Aunt Marjory’s perceived disabilities.

Cerebral palsy (CP) is a blanket term used to describe disorders that affect a child’s muscle tone, coordination, and posture. It is caused by an injury to the brain during pregnancy, delivery, or shortly after birth. CP does not get worse, but there is no cure for the condition. Symptoms - which may also include intellectual impairment - may be mild to severe, depending on the type of CP and the area of the brain that has been injured.

Born at a time when families were advised to institutionalize children with disabilities, Marjory was instead an integral part of Spiker family life. In fact, that may be the very reason none of our parents mentioned it. Labeling her condition served no purpose; it didn’t matter. (After all, it really COULD have been the excess weight that slowed her steps.)

We have very few photos of Marjory Fay Spiker. None is in color (I’m pleased to hear she had red hair like so many of our kin.) But we do have several stories from which to remember her. Here are a few snippets from our Library (to read the full story, click the Author’s name, below.)

Last month we told you about a large, framed photograph of two unknown women whose eyes followed you through the hallway and down the stairs. (Well, at least according to Drew and Brock. And possibly Beckett, too. Read the full story here.) We ended the article with a promise to reveal the identities of the women in the “creepy photo” so here is the rest of the story. 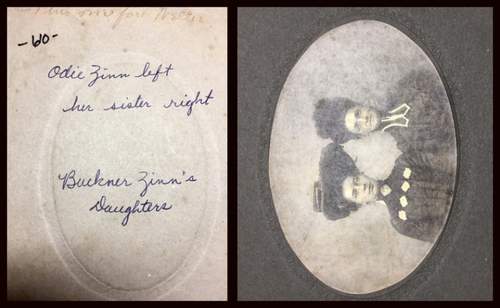 As soon as I saw the photo, I knew I had seen it somewhere before. After a bit of sleuthing, I found a strikingly similar photograph in my genealogy files. The image was courtesy of Jerry Watson. It had been in his mother’s private collection. 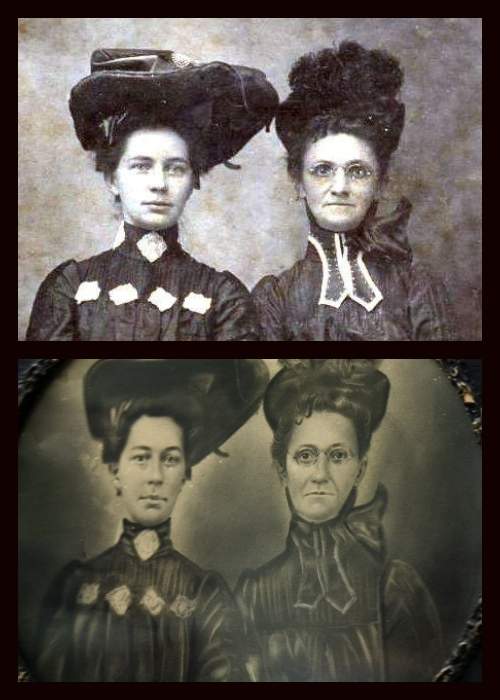 Jerry told me that about 40 years before Elizabeth died in 1991, he had gone through all of the old family photos with her. She was able to identify about 80 percent of them, and Jerry dutifully wrote the names and details on the backs of the images.

Jerry’s photo had an original marking that read “This one for Nellie,” (referring to his grandmother.) Elizabeth had told him the women in the photo were Ila “Ota” Zinn (which he wrote as “Odie”) and her sister (presumed to be Eliza Jane Zinn), daughters of William Buckner and Anna Marie (Ward) Zinn.

So yes, the women in the “creepy photo” are our relatives. Our second cousins twice removed, to be exact. But no, Jerry’s photo (at right, top) and Brock’s photo (bottom) are not exactly the same.

It’s obvious the two photos were taken during a single photography session; the clothing, the stances, and the backgrounds are identical. But if you look closely, you’ll notice the differences in expressions, especially around the mouth. And most importantly, you’ll see that the eyes in Jerry’s photo aren’t creepy at all.

Perhaps that is why the girls wanted the “non-creepy photo” to be given to Nellie.