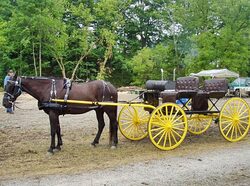 The buzz about town has been the Spiker Buggy, restored to its former glory (perhaps even more magnificent than ever before), recently seen traveling the streets to McDonalds in Ellenboro and other locations.  The buggy will make its formal debut at the Spiker Family Reunion next May.

No one recalls when, where or from whom Jake and Gay Spiker purchased the buggy.  But based on stories passed down to my father, Brad had used it to fetch the doctor to the Spiker farm to attend my father’s birth, affirming it is at least 85 years old.

That it was too small to accommodate the entire Spiker clan was obvious…at least to my father.  When Daddy was a tiny tot, he approached the fully loaded vehicle with a distressed and questioning look on his face, proclaiming to his mother, “Me tinks me has to sit on somebody’s lap.  There’s no room left for me.” 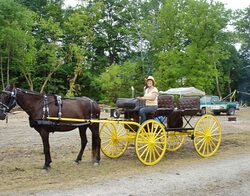 For many years the buggy was used by the family to attend church services and to go shopping in Pullman.  Mother recalls using it on one occasion; she and Daddy did not have a car until long after they were married, so they borrowed the buggy for a grocery shopping trip to Ray and Elsie Bonnell’s store (Mother’s parents) in Berea.  It was a very cold day, and the trip “over the back roads” would be long and bumpy.  Gay wrapped hot bricks in cloths, placing them at Mother and Daddy’s feet to help keep them warm on the journey.  Daddy took the reigns, and Mother, with eyes closed, held on for dear life.

It is believed that the buggy has sat, unused, since around 1950.  Stored in an outbuilding on the Spiker farm, it has been abused by years of neglect, layered in dust, assaulted by two floods and ultimately forgotten until recently when Mike, Mark and Marilyn Spiker decided to bring it back to life.

“After the 2004 flood,” Mike Spiker said, “I had pressure washed part of it since it was flooded and covered with mud, and just left it in the building. When we went to move it, the wheels turned easily as if it had been used the day before –  which it had not. We thought that we should preserve this part of family history and just now got around to it.

“Mark and I had talked for several years about getting it rebuilt, but not until Marilyn got into the horse business and got really interested did we proceed. She and Mark found an Amish restorer, who they communicated with by mail, – he has no phone –  to rebuild it and then they arranged a date to take it to him. I got a car hauling trailer and met them at farm.  We removed it from building, put it on the trailer, and away Mark and Marilyn went with the buggy. They kept it at their house until the man could work on it.  We now have a special enclosed trailer to haul it, and Mark and Marilyn are having their horse trained to pull it.” 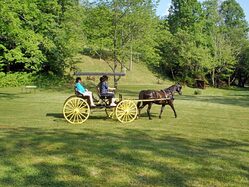 Marilyn Spiker added, “The buggy was in bad shape because it had been in two floods…Mark and I took it to an Amish family for the restoration…The wheels were replaced because the bearings were bad…All the leather had rotted and needed (to be) replaced…I purchased a new harness for my horse, Beau, and he is being trained to pull it….I plan to take it to the Spiker Reunion next year.”

Let’s all hope that Beau likes his new job because it appears he will be providing buggy rides at the Spiker Family Reunion.