Schools and church buildings served as primary places of early education and worship, but they also provided a sense of community and fellowship as hosts to many types of social events. We’ve excerpted some examples in this edition of the Courting Letters.

20 Oct 1905 – Gay wrote, “Our school commenced Monday with May Griffin as teacher. Coe and Katie are going.”

21 Jan 1906 – Gay wrote, “Oh dear isn’t this a pretty day. How I wish you was here. What a time we would have. I wonder where you are at. I know where I am and have been all day – at home and nobody here except the family or part of it, I might say. Katie and Coe isn’t here. They are in Gilmer going to school. Roy Bee came over last evening, and the bird had flown, ha ha. (See May edition for more about the relationship between Kate and Roy.)

7 Feb 1906 – Gay wrote, “Daisy and I went to Spelling School (last Thursday night down to the old School House and what a time as they had, cheating and quarreling. There was lots of whiskey there. Daisy and I both got gray coming home, ha ha.” (Spelling School was a friendly competition open to all ages and skillsets. Tickets cost around ten cents; the proceeds were used to fund a community project.)

14 Mar 1906 – Gay wrote, “Katie came out home Saturday evening. She was full and overflowing with news to tell me. She is having such a fine time so she thinks. There is just a month of their school yet I am going out if I can. Roy Bee heard she was home and he came over Saturday evening, and then came back Sunday noon and went home with her.”

28 Mar 1906 – Gay wrote, “I received a letter from Katie Saturday evening. They sent me a dialogue to get to say the last day of school. It will be out Friday week. Daisy talked to her on the phone twice this week….I am going to recite 4 pieces and be in one dialogue.”

12 Apr 1906 – Gay wrote, “This night before I go to dreamland I will try and answer your nice letter. You said for me to tell you all about our last day of school. Oh such a time as we had. The house was full and running over. We had one royal good time. We played Squirrely (a kissing game often played at parties) and my, but I got lots of kisses, but they wasn’t sweet. Roy Bee was out. He played off on me twice. I will get ahead of him yet. Coe introduced Roy to two of her girlfriends as her “brother,” and he looked funny, you might bet. We had an awful good program.”

12 April 1906 – Jake wrote, “My dearest, this gloomy Easter finds me trying to answer your nice letter and just the kind that a homesick boy likes to receive. A letter full of love and fun. I am very sleepy and lonesome today, but I never get too lazy to write to my own little girl. You said that you got kissed a dozen times or more. You don’t know how jealous that makes me when I wish that it had been me that done the kissing. Yum Yum. For you know that I am a great hand at kissing, that is, I am very fond of them, the kind that you keep, ha ha. And if brother Bee don’t quit playing off on my girl, he is apt to get a black eye, ha ha.”

17 Feb 1907 – Gay wrote, “Our school will be out in 2 weeks. If he teaches Saturday, it will be out on Saturday. It will be out the 2nd of March. We are going to have a nice program if nothing happens.”

4 Mar 1907 – Gay wrote, “Our school was out Friday. We had an awful nice time and there was a large crowd there. The trustees wanted Mr. Britton to come and teach the school next winter. Nearly all of the scholars cried. Mr. Britton certainly was awful nice all the time he was here. And we all respect and think well of him.”

29 Nov 1904 – LENA WARD wrote to Jake, “Well Jake, you ought to have been here last Sunday. There was not but eleven here and we had a time too. I suppose you will attend the protracted meeting that Preacher Roberson will begin next Sunday at the Baptist Church at Washburn. If nothing happens, I think two of my cousins will be down here at Emma Arnouse’s on a visit next Friday week. Then I will go down to visit my Aunt Mag Hammer Saturday and stay there until Sunday morning, for she lives close to the church. We will go to church Saturday night and Sunday if nothing happens, and we get to go. I think we will if the weather is not too bad. And you be where and be there if you can Saturday night. But I will expect to hear from you before then and if anything should happen that we do not get to go I hope you will not be disappointed at all. But I think we will be there if nothing happens for, I certainly would enjoy being with them and also seeing you. Your old friend, Lena Ward. Good Night.”

13 Dec 1904 – LENA WARD wrote to Jake, “My cousin and I got home all O.K. and I stayed all night with my cousin Sunday night and came home Monday morning. We stopped at Berea Sunday night for church, but I came very near freezing before we got [there.] Has the meeting broke down there yet? The preacher is talking of having a protracted meeting at Auburn the first of next month and if they do, I would like for you to come. From your old true friend, Lena Ward.”

10 Nov 1905 – Gay wrote, “We girls are attending the protracted meeting at Oxford. Rev. Robinson is pastor. Mother goes in the day time and we girls at night.”

13 Nov 1905 – Jake wrote, “There is going to be a protracted meeting begin at Chevauxdefrise next Sunday night and there we will have some place to go [when I come to visit next week.]”

26 Nov 1905 – Jake wrote, “I have been going to [the protracted] meeting every night since I came home. They are having a big time and they are the most pretty girls, and that suits me, ha ha. I got home all O.K. It was just twenty minutes past seven. I hope you are having lots of fun and reading your Bible, ha ha.” 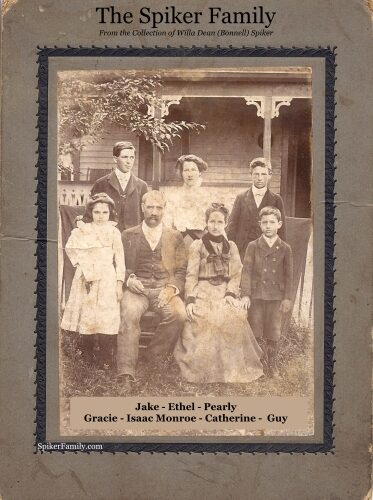 8 Jan 1906 – Jake wrote, “I got a letter from [my brother] Pearley last evening and he was just having a fine time going to meetings at Mt. Zion. He said that they was just having a big time. They have had 14 professions.”

7 Mar 1906 – Gay wrote, “I was at meeting today. We had a good meeting. [Rev.] Robinson referred in his sermon to what he heard Roe Spiker [Isaac Monroe Spiker] say to his daughter, Grace, [Gracie Spiker] when she was there one time. Several of the kids looked at me and winked.”

11 Mar 1906 – Jake replied, “What did Rev. Robinson say that Papa said to Gracie? You never told me what it was. He is always petting Gracie. He just seems to think she is the only child that he has got. She is a sweet kid. I got a great long letter from her yesterday and I will have to answer it today.”

14 Mar 1906 – Gay replied, “Rev. Robinson was telling how a word of encouragement helped one along. He made this illustration. He said he was at Brother Monroe Spiker’s and he said he had a little girl that had just begun to learn her letters. And Mr. Spiker said, Gracie come and say your lesson. And she said she didn’t know more than half of her letters. But he said she was doing fine. And Rev. Robinson said, you ought to of seen her countenance brighten. He went on to tell and told all about it.”

2 Apr 1906 – Gay wrote, “I was at Sunday School on Bear Run Sunday. They choosed me teacher of the Young People’s Class and I wouldn’t serve. And then the little girls choosed me as their teacher, and I tried to please them. I will do the best I can and know how, but I think they chose a mighty unworthy teacher.”

10 May 1906 – Gay wrote, “My brother [in-law], Henry Allman, came out Sunday afternoon. All of the family went to Sunday School but me and I went to bed and was asleep when he came. He teased me about catching me in bed.”

13 May 1906 – Jake wrote, “Gay, do you know Nora Tharp? She says that she youst [sic] to go to the same Sunday School, that you did over at Horn Creek. She is working up here in the house next to this one.”

5 Jun 1906 – Jake wrote, “I was at the Baptist Church some more and heard the baccalaureate sermon preached in honor of the Broadus students.”

11 Jun 1906 – Gay wrote, “There is a Sunday School Convention up to the Horn Creek Church Wednesday and Thursday. I wish you was here to go too.”

20 Jun 1906 – Gay wrote, “I have been having a very pleasant time. The Sunday School Convention went off smoothly with lots of hard work and fun.”

20 Jan 1907 – Gay wrote, “There has been 3 protracted meetings going on close here for the last week, one at Auburn, Newberne, and one on Sinking Creek. Fay and I wanted to attend some, but we couldn’t. It rained nearly all the time.”